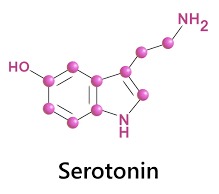 Serotonin is a neurotransmitter, a chemical found in the body that regulates sleep, body temperature, mood, learning, memory formation, appetite, and sexual desire. It’s the main brain chemical involve with helping us feel relaxed and happy, keeping us in a generally positive mood. A serotonin imbalance can trigger mental health issues, such as obsessive compulsive disorder (OCD) and even depression.

Fortunately, there are ways to regulate serotonin levels if you have an imbalance. For many people, regular exercise, light therapy, and making some changes in the diet can increase serotonin production in the body. However, the effects of these changes can take some time which is why we recommend serotonin supplementation.

Supplementation with serotonin bathes the neurons in the brain with those feel-good chemicals that promote feelings of contentment, well-being, and comfort. A physician typically starts with a smaller dose of serotonin and works up to the desired dose. You can supplement with oral serotonin once every 24 hours.

Contact us if you have questions about your prescription for serotonin or other supplements and prescriptions recommended by your physician.