Why Serotonin Can Cause Depression And Anxiety 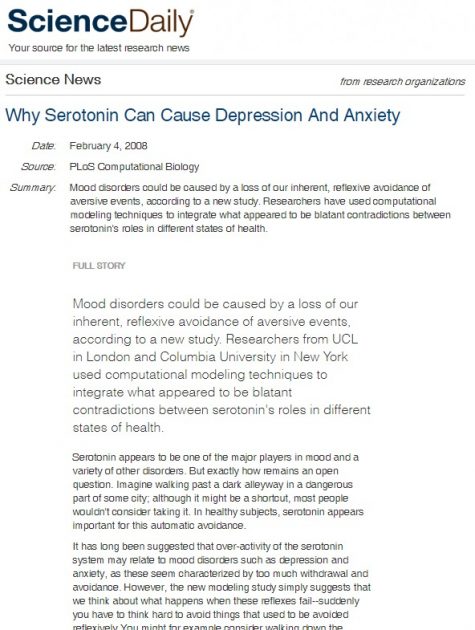 As a neurotransmitter, serotonin helps to relay messages from one area of the brain to another. Because of the widespread distribution of its cells, it is believed to influence a variety of psychological and other body functions. Of the approximately 40 million brain cells, most are influenced either directly or indirectly by serotonin. This includes brain cells related to mood, sexual desire and function, appetite, sleep, memory and learning, temperature regulation, and some social behavior.

What is the link between serotonin and depression?

There are many researchers who believe that an imbalance in serotonin levels may influence mood in a way that leads to depression. Possible problems include low brain cell production of serotonin, a lack of receptor sites able to receive the serotonin that is made, inability of serotonin to reach the receptor sites, or a shortage in tryptophan, the chemical from which serotonin is made. If any of these biochemical glitches occur, researchers believe it can lead to depression, as well as obsessive-compulsive disorder, anxiety, panic, and even excess anger.

It has long been suggested that over-activity of the serotonin system may relate to mood disorders such as depression and anxiety, as these seem characterized by too much withdrawal and avoidance. However, the new modeling study simply suggests that we think about what happens when these reflexes fail–suddenly you have to think hard to avoid things that used to be avoided reflexively You might for example consider walking down the dangerous alley, be robbed and thus be reminded and taught by additional experience that dark alleys are to be avoided.