March 5, 2019 was a banner day in the fight against depression, anxiety, and other serious mood disorders. For the first time in 30 years, the FDA approved a radical new treatment option for individuals suffering from treatment-resistant depression. This new FDA-approved treatment—SPRAVATO™—is based on years of scientific and anecdotal evidence indicating that ketamine, a well-known anesthetic, may offer an effective treatment for depression when delivered in extremely low doses. SPRAVATO™, developed by the Janssen Pharmaceutical Companies of Johnson and Johnson, is not actually ketamine, in fact, but is a nasal spray of a ketamine derivative known as esketamine.

The push in the medical and scientific communities to develop an FDA-approved, ketamine-based treatment option has been growing for several years. After all, ketamine has been safety and effectively utilized as an anesthetic by physicians and veterinarians since 1970. For example, one of the most highly publicized instances of ketamine usage occurred in 2018, when ketamine was used to sedate 13 members of a Thai youth soccer team who had become trapped deep within a flooded cave system, enabling their successful rescue. Over the past decade, physicians and psychiatrists have been seeing extremely successful results using low doses of ketamine “off label” in the treatment of mood disorders such as depression and anxiety.

The first sign that the FDA was nearing approval of a ketamine-type treatment option came on February 12, 2019 when The FDA’s Psychopharmacologic Drug Advisory Committee and the Drug Safety and Risk Management Advisory Committee together voted that the benefits of the esketamine nasal spray far outweighed the potential risks for patients living with treatment-resistant depression. This vote stemmed from the results of five Phase 3 studies on SPRAVATO™, all of which demonstrated that the treatment offered “statistically significant” and “clinically meaningful” improvement of depressive symptoms both in the short term and over a sustained timeframe. Moreover, these studies indicated that the treatments were well-tolerated with only generally mild and short-term side effects. Janssen noted in its application that if approved, continued evaluation of the risks and side effects of the treatment would continue through a robust Risk Evaluation and Mitigation Strategy (REMS).

How Does SPRAVATO Work? 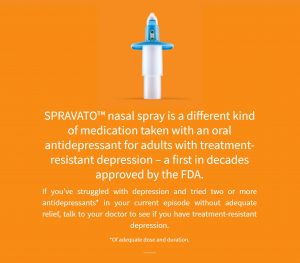 SPRAVATO™ is a nasal spray through which a low dose of esketamine is absorbed through the lining of the nasal passages into the blood stream. In scientific terms, esketamine is the s-enantiomer of ketamine; because ketamine is a mixture of two enantiomers (or mirror image molecules), esketamine is literally half of the chemical compound known as ketamine. However, it appears to impact the chemistry of the brain in the same way that ketamine does.

Scientists are still studying the exact mechanism by which esketamine (and ketamine) stimulate relief from depressive symptoms. The most current theory is that both esketamine and ketamine are N-methyl-D-aspartate (NMDA) receptors; in other words, esketamine prevents the brain from incorrectly absorbing glutamate, a neurotransmitter that controls the number of brain synapses. Restoring the proper balance of glutamate quickly establishes the correct balance of neurotransmitters needed for a healthy and well-functioning brain, providing a rapid and effective decrease in depressive symptoms and even suicidal ideation.

SPRAVATO™ is FDA approved for use by individuals with treatment-resistant depression, who have not responded positively to two or more different oral antidepressants (in correct dosages and durations). It is meant to be taken as a supplement to a daily oral antidepressant. While the nasal spray is self-administered, it can only be taken while under close medical supervision in a certified SPRAVATO™ treatment center. During treatment, the patient is closely monitored for a minimum of two hours by a healthcare professional for both effectiveness and potential side effects. As with any medication, it is important to discuss all medications you take and your complete medical history before starting a SPRAVATO™ treatment.