Sodas and other Sugar-filled drinks in Our Diet

I have to admit I have a diet soda habit. It’s the best pick me up in the world. I don’t know why that is, but nothing gives me more energy than Diet Coke. I could drink three cups of coffee and still be tired, but a 12-oz bottle of Diet Coke will wake me right up. Sodas have become part of everyday lives of people all over the world. But drinking soda regularly can lead to weight gain, increased risk of type 2 diabetes, kidney stones, osteoporosis, , and tooth decay. In addition, white sugar and refined carbohydrates should also be avoided when watching your triglycerides. 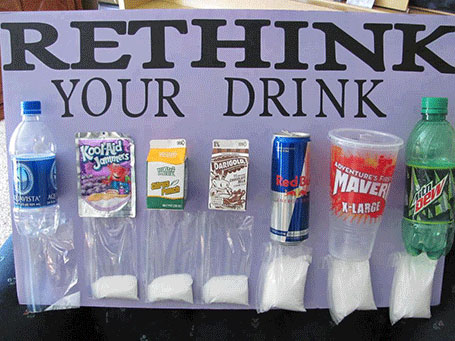 Drinking store bought juice is not much better than drinking soda. Juice will fill up your belly with empty calories, and give you very little nutrients. It elevates blood sugar levels which can contribute to insulin resistance and diabetes. Eating the whole fruit will provide the body with fiber which will balance out the effects of some of the sugar in the fruit.

The rate of childhood obesity has tripled in the last thirty years in the United States and health officials warn against everyday consumption of sodas, and even juices by children. The guidelines issued by the American Academy of Pediatrics state that fruit juice should not be given to children under 6 months old and should be limited to four to six ounces a day for children up to six years old.

Most sugary drinks are made with sucrose or fructose (high fructose corn syrup). Consuming too much of both will result in increased blood glucose levels, increased insulin production, impaired glucose tolerance, and insulin resistance. Beverages containing large amounts of fructose such as soda and orange juice will also increase the risk of gout.

Soda drinks sweetened with artificial sugar contain no carbohydrates and will not directly raise blood sugar levels. They are the soda of choice for people with diabetes or at risk of diabetes. However, they still have the same undesirable affects as regular sodas on the body, and additionally will increase sugar and carbohydrate cravings after they are consumed. This is due to the fact that after consumption of diet soda, the body cannot properly assess the amount of calories consumed.

Replacing sodas with other Drinks

Water contains no calories, sugars, fats, artificial colors or flavors. It’s needed by every single cell in the body. Drinking water will boost metabolism and positively affect weight loss. People can also confuse thirst with hunger which will hinder their weight loss efforts, so it’s very important to drink plenty of water during the day to keep your body healthy, fit, and strong. Add a few slices of cucumber, strawberries, or a few mint leaves in your pitcher of water to encourage consumption of water in the household.

As with many other changes in the human diet in the modern times, sodas, and other sugary drinks are difficult for the body to process and will create more disadvantage than the temporary satisfaction you might feel after having one.